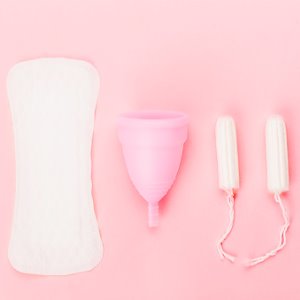 It’s the latest debate isn’t it, tampon, sanitary pad or the newcomers to the block the menstrual cups and period pants?  Lets break down which is the healthiest.

Although super convenient and for many of us very familiar, tampons, are shockingly full of health concerns and risks.  Once up to their maximum absorbing capacity, tampons allow blood to pool and stagnate in the cervix. This stagnation encourages Staph bacterial overgrowth and infection, which is concerning due to the highly absorbent nature of the cervical mucous membranes.  A highly saturated tampon is in itself, also the ideal environment for  rapid bacteria growth, especially if left for longer periods of time than recommended.  Bacteria overgrowth encourages the release of toxins that can then enter the blood stream and cause life threatening Toxic Shock Syndrome.

If that wasn’t alarming enough already, let’s look at the tampon’s main material, cotton. Cotton sounds innocent enough, but did you know it is the most heavily sprayed crop in the world? If the brand of tampon you are using is the non-organic variety, it may contain trace amounts of carcinogenic pesticides.  According to an Argentinian study in 2015, 85% of tampons and sanitary pads were found to contain Glyphosate.  Glyphosate is the primary ingredient in the notorious Monsanto herbicide, Roundup, and is linked to multiple myeloma and non Hodgkin’s lymphoma. (1)

Most tampons are also bleached using carcinogenic chlorine dioxide. Although dioxin in trace amounts is deemed safe,  the tampon is sitting in highly absorbent mucosal tissue.   The vagina and the vulva absorb fluids at a much higher rate than skin, which means they are highly effective when it comes to absorbing those trace amounts or dioxin, pesticides and herbicides. (2)   Both the vagina and vulva have such a fast absorption rate that they are unable to metabolise most chemicals, which means women are exposed to even higher levels of chemicals than was ever deemed possible by manufacturers.

The majority of tampons contain plastics and other additives to increase their absorbency.   As mentioned in  my previous blog ‘Plastic is Damaging Our Reproductive Health’, plastics when warmed leach chemicals that are known endocrine disruptors which ultimately mess with your chance of conceiving.  Once again those delicately thin and highly absorbent cervical mucous membranes cushioning that tampon, are efficiently soaking up the bad guys.  There is even cause for concern with the plastic wrap on most tampons, if heat sealed on manufacturing.

Sanitary pads unfortunately hold the same risks although to a lesser extent.  Most contain trace elements of pesticides, herbicides and dioxin.  All sanitary pads are resting on the highly absorbent vaginal tissue. Their only blessing is there is less risk of Toxic Shock Syndrome.   Sanitary pads are one of the safest options if  you ensure they are certified organic cotton and the non bleached variety.

Menstrual cups are made from medical grade silicone so do not have all the nasty chemicals, pesticides etc absorbing into your body.    In a 2018 study though, research demonstrated that they hold a greater risk of Toxic Shock Syndrome than tampons, as higher levels of staph and toxins were seen to accumulate!  Researchers believe this is due to the additional air pocket within the menstrual cup, allowing for bacteria growth (3).  There should also be reason for concern  with the length of time between emptying menstrual cups as opposed to changing tampons.  Due to inconvenience many users are leaving menstrual cups in place for up to 12 hours.   Cups also need to be sterilised in boiling water for the staph bacteria to be destroyed, a difficult feat if you are emptying when you are out and about!

‘Period pants’ have hit the market in recent years as a healthy option, although reviews tend to be mixed on their effectiveness in being enough coverage on their own.  Some manufacturers are not releasing the secrets to their absorbency, which is a little worrying.   If you are interested in investing in these, make sure the brand you buy is plastic free.  Most do have an anti-microbial layer to avoid bacterial overgrowth.

Possibly the safest option overall is using a sanitary pad that is 100% certified organic cotton and changing regularly to avoid bacterial overgrowth.    For the ecologically minded, there  is now even  a reusable sanitary pad on the scene with layers of 100% certified organic cotton.   The only downside is that these need to be soaked in cold water for up to 12 hours before washing.   The health and environmental benefits though far outweigh the inconveniences.